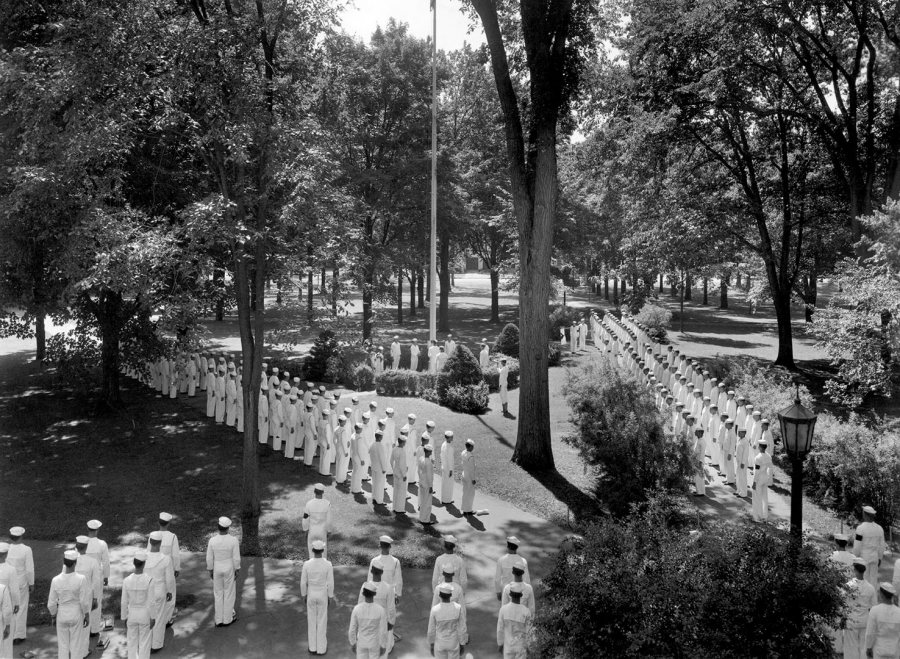 Navy men in dress whites stand at attention for morning colors on the Historic Quad. (Photograph by George French, Class of 1908, courtesy of the Edmund S. Muskie Archives and Special Collections Library)

V-12 was a marriage of convenience. With the World War II draft age at 18, the Navy feared a shortage of college-educated officers. Colleges like Bates, meanwhile, faced dwindling wartime enrollments. From a pre-war high of 749 students in 1940, Bates’ enrollment was in free fall, tumbling to 594 by spring 1943.

The Bates V-12 trainees included enlisted men who’d already seen action in the Pacific, plus high school graduates, like the one who thought a train trip from Rhode Island to Maine was a big deal.

Other trainees had tasted college life at large colleges, like Syracuse, or at small ones like Virginia State College for Negroes, whence Shearon Dudley, the sole African American in the V-12 unit, came to Bates. (The Navy would integrate its officer ranks in 1944.)

Many came from rival colleges like Colby, Bowdoin, or UMaine (in fact, of the first V-12 contingent of 275 sailors in summer 1943, 75 were Polar Bears).

Others came from small colleges like Middlebury or Haverford, and from the Ivies. Coming to Bates from Harvard was Bobby Kennedy. Another Bates V-12 sailor was the late U.S. Rep. Leo J. Ryan, killed in Guyana in November 1978 during the Jonestown Massacre. 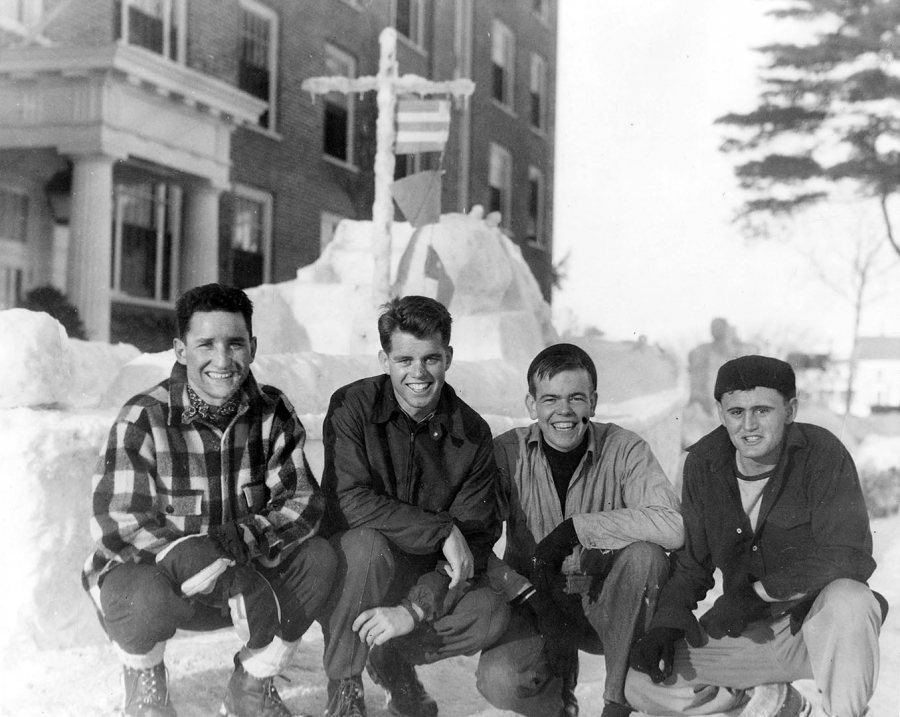 A member of the V-12 unit at Bates, Bobby Kennedy (second from left) poses in front of a Winter Carnival snow sculpture of a Navy ship. (Muskie Archives and Special Collections LIbrary)

“Democratization” is how Lou Scolnik ’45, a V-12 and Bates alumnus, describes all these men — especially the competitive subset of Polar Bears, White Mules, Black Bears and Bobcats — cohabitating on a coeducational campus.

And then there was the issue of nonmilitary male students alongside military men, which created a wary atmosphere. “Like two strange dogs” is how Professor of Biology William Sawyer ’13 once described their getting-along. 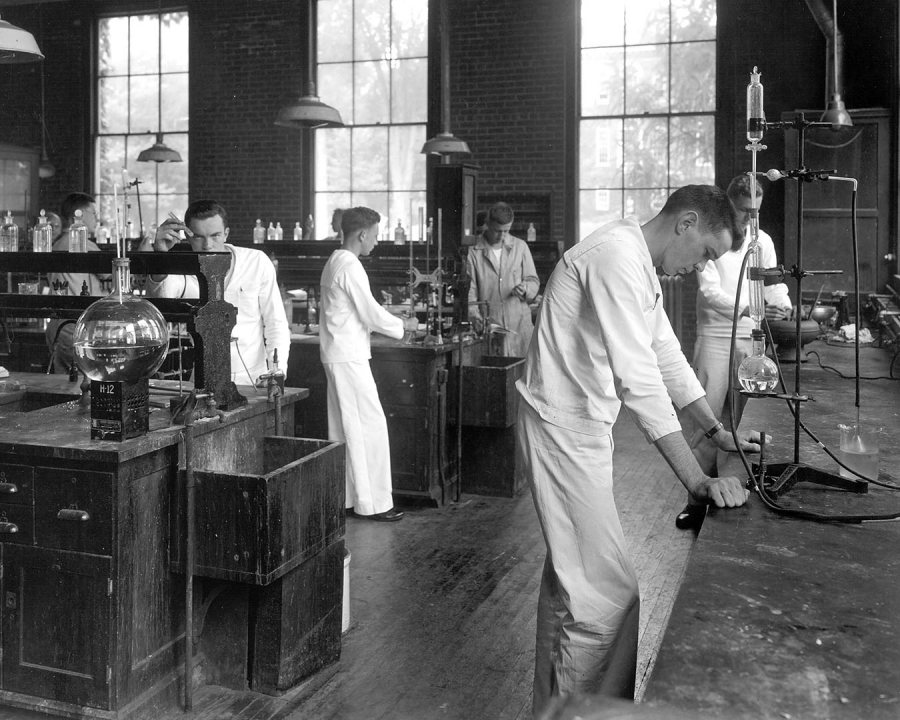 After room inspection and performing morning colors in front of Hathorn, the trainees attended classes with civilians until late afternoon. (Muskie Archives and Special Collections Library)

Reveille was at 5:50, then a half-hour of calisthenics, then breakfast. “I’ll always remember walking into JB for breakfast. Mmmmm, the wonderful smell!” Scolnik says, and the Alumnus agreed, calling the sailors’ food “wholesome [and] palatably cooked.”

Then there were the minor nuisances of military life: “Got another inoculation yesterday and do not feel very well today,” V-12 veteran Dana Smith wrote home to Hollis Center, Maine. 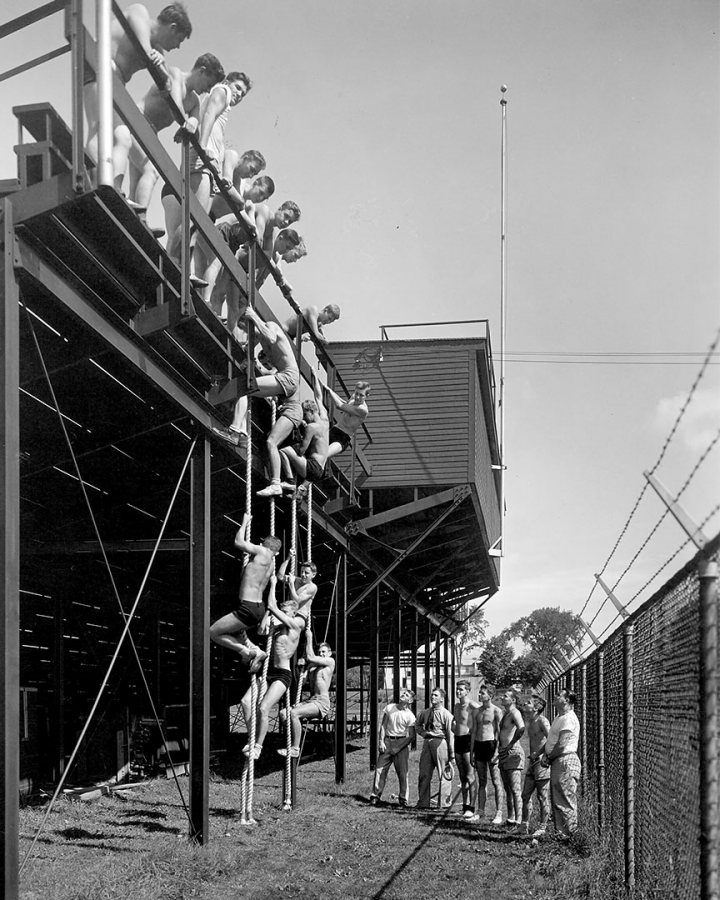 “We all followed the exact same restricted routine, week in and week out,” Smith says today. “It forced us to look to each other within the dorms for some kind of social interaction. Even dangling ropes provided some kind of bond!”

All told, the Bates V-12 program prepared 782 men for duty from July 1943 until the unit disbanded in October 1945. Smith writes an annual newsletter and otherwise serves as the Bates group’s communications officer. For the last two years, the annual V-12 luncheon has been held at the College’s Muskie Archives.

“I think that most men, but especially those with military experience, reach a point where they would like to reconnect with the fellows they served with,” Smith says. “Sharing that common experience, whatever form it took, is a magnet.” 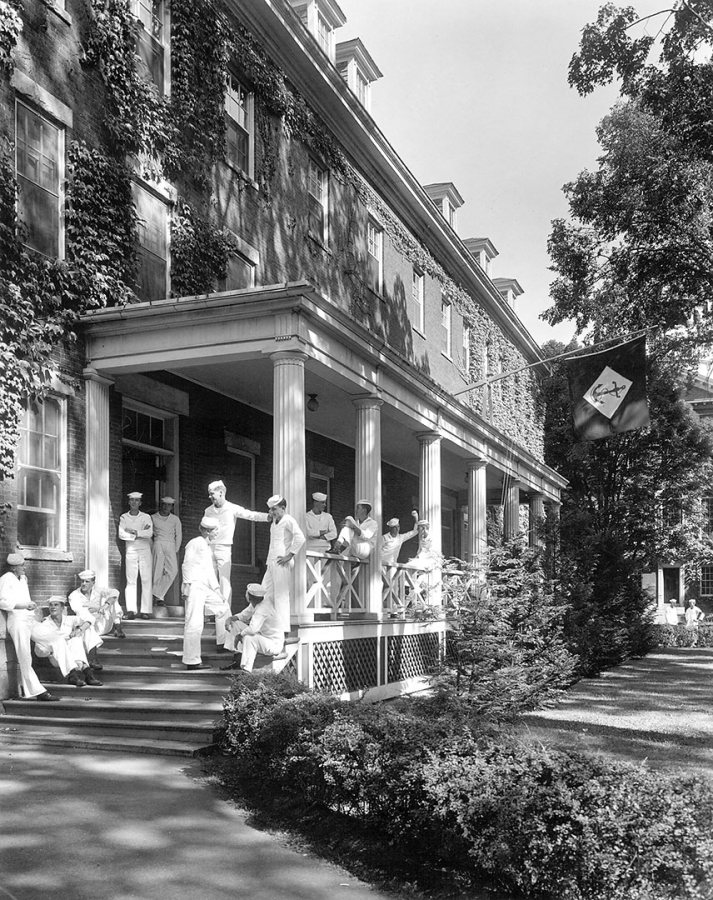 Bates’ V-12 materials, along with those donated by Smith, constitute the permanent “U.S. Navy V-12 Collection” at the Muskie Archives and Special Collections Library. A plaque honoring the V-12 unit is on display in the archives.

While many of the V-12ers had a disrupted college course (Smith went from Bates to Yale then to UMaine after the war), Scolnik, a Lewiston man, attended Bates before, during, and after his wartime service.

When the U.S. joined the war in 1941, Scolnick was already a Bates student. He joined the Navy, which allowed him to stay at Bates until July 1943, when he was ordered to report to V-12 duty “at Bates College, Lewiston, Maine.”

“So I walked six blocks to join the Navy,” says Scolnick, who would return to campus after the war to earn his degree,