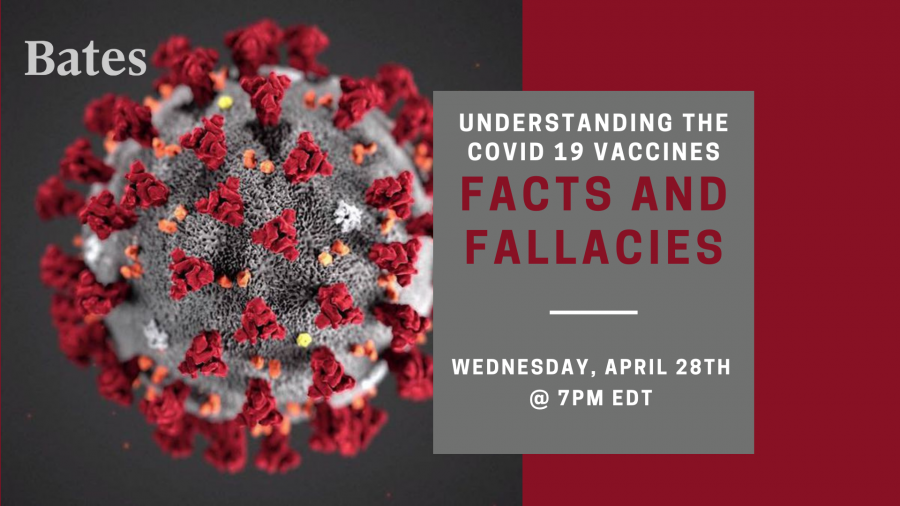 WATCH THE RECORDING: Understanding the COVID 19 Vaccines – Facts and Fallacies

Learn about the current data on the COVID-19 vaccines from Louis Weinstein ’68. The decision to get vaccinated is a personal one, and this program will provide information so that you can make a better informed decision. This virtual program will be moderated by Larissa Williams, Associate Professor of Biology at Bates.

Dr. Williams is an Associate Professor of Biology at Bates College where she teaches courses in molecular and developmental biology and runs an undergraduate-focused research program that explores toxicant-induced oxidative stress during development using the zebrafish model.

She received her B.A. from Smith College in Biological Sciences in 2005, a Ph.D. in Environmental Toxicology in 2010 from North Carolina State University and was a NIH NRSA postdoctoral fellow at the Woods Hole Oceanographic Institution from 2010-2012. Funded through the NIH and NSF, she has mentored 36 undergraduate research projects at Bates College since 2012 which has resulted in ten publications with 18 undergraduate student co-authors.

Born in Cambridge, Mass., Louis Weinstein, MD, received his undergraduate degree in chemistry from Bates College in Lewiston, Maine. Following medical school at Wake Forest University Bowman Gray School of Medicine, he completed his residency in obstetrics and gynecology at the University of Colorado, served as a lieutenant commander in the U.S. Navy and completed a fellowship in maternal fetal medicine at the University of Arizona.

While on the faculty at the University of Arizona, he rose in academic rank to full professor, served as director of divisions of both maternal fetal medicine and research, and was recognized for discovering and naming HELLP (hemolysis, elevated liver enzymes, low platelets) syndrome in 1982, a severe form of preeclampsia that has substantial morbidity and mortality for pregnant women. His original publication on HELLP syndrome was recognized in 2010 by the American Journal of Obstetrics and Gynecology as the 12th most frequently cited publication in obstetrics/gynecology during the previous 50 years and in 2018 his work was the 8th most cited manuscript in the previous 100 years in the American Journal of Obstetrics & Gynecology.

In 2011, Dr. Weinstein moved to Charleston, S.C., where he became Director of women’s services for the Barrier Island Free Medical Clinic, which serves the region’s uninsured patients.

He has published more than 150 manuscripts/book chapters and in 2003 was the first person to write about and initiate the Laborist movement, the most rapidly growing specialty within Ob-Gyn. He has remained active nationally, serving on various committees and task forces for the American College of Obstetricians and Gynecologists for 35 consecutive years.

He is on the Governing Council of the Senior Physicians Section of the American Medical Association in which he is past Chair of the Governing Council and current Chair of the Education Committee.  On the Governing Council, he advocates for greater involvement of the senior physician in the teaching and mentoring of medical students, residents and junior faculty and finding solutions in order to ameliorate medical student debt crisis.   He has recently been appointed to the Board of Directors of Volunteers in Medicine America, Alumni Council for Bates College and the Medical Alumni Association for Wake Forest University School of Medicine.

This virtual event is open to Bates alumni, and registration is required to attend. You may pre-submit your questions as part of the registration, and you will also have an opportunity to submit them live during the webinar.