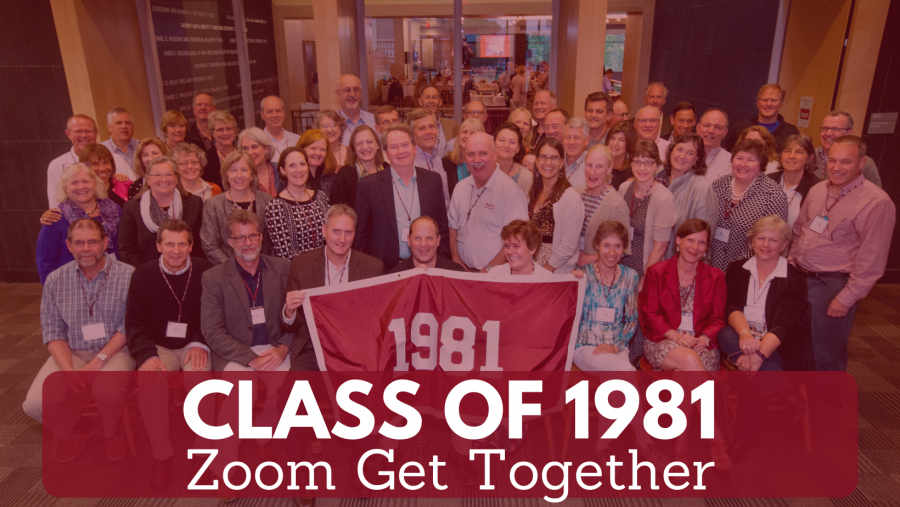 The 40th Reunion Social Committee invites you to join us as we hear from four of our very own classmates with incredible stories. Spread the word, grab your favorite drink, and join us to hear about their journeys and experiences since their time as students at Bates.

About our Guest Speakers:

JULIE MARTEL
After Bates, Julie Martel joined the Peace Corps and spent four years in the Democratic Republic of the Congo. She then took a leap in a different direction and pursued a graduate degree in statistics. As a statistician, she worked on NIH studies in academia and in high tech as a process control engineer before landing at Pfizer, where she has spent the last 23 years. She has been married to Fred Behringer for the last 30 years and has three wonderful (adult) children. She will talk about drug development in light of the COVID vaccine work and circle back to the development work she did when she first started out.

KAREN JUST GRAHAM
Karen Graham will talk about how life takes its turns and twists; how a girl who grew up overseas (in Mexico and Spain) ended up at a place like Bates College; how she felt out of place but found friends and was not always comfortable there but did have a good experience at the end of it all. Since Bates, Karen got her first job teaching at the Taft School in Connecticut as a Spanish/French teacher and there met her future husband, John Graham. They married and moved to Oregon, where he was an entrepreneur. While he built an organic garden supply business for 16 years, Karen worked as a certified Spanish court interpreter/mom/Spanish teacher. Together, Karen and John not only raised three amazing daughters, we also launched businesses (pizzerias), including a Blues club. Eventually, Karen became a private investigator working in criminal defense on many cases (many of which involved Spanish-speaking clients). Karen is also now the “Tita” to four grandchildren. Her three beautiful daughters live on the west coast and are a source of joy.

BRIAN POHLI
Brian graduated from Bates in June of 1981 and has spent 30 of the last 40 years out of the US. He will speak about an American’s view of America outside of America. In August of 1986 he got tapped on the shoulder and told that he was going to Tokyo in two weeks. His boss at the time was Mike Dawes whose grandfather was the Vice President of the US and was a Trinity football player. One week later, there was a change of plans, and he was given a ticket to Hong Kong. He would be out of the country for 30 out of the next 35 years.

LILLIAN BUCKLEY
Lillian Buckley is a lifelong Mainer with Mississippi roots, as she spent several childhood summers in the region of her parent’s birth. She served as a US Postal employee for 31 years in various postmaster positions and as the diversity manager for the Greater Boston area. Additionally, Lillian has served as pastor for various Baptist Churches in the Seacoast Region of northern New England. Lillian received a Master of Divinity degree from Harvard University in 1997 and a Doctor of Ministry degree from Gordon Conwell in 2010. With a variety of interests, Lillian has coached JV girls high school field hockey, girls junior high school basketball, served as the youth advisor of the Seacoast NAACP, and she has written and performed a body of music entitled Utterance. Lillian is currently illustrating a children’s book and is the primary caregiver for her dear Mom, Jewel.